Syrup of ipecac may soon be thrown out from the medicine cabinet. In the past, ipecac was a household staple commonly used to induce vomiting in victims of poisoning. But recently, the American Academy of Paediatrics no longer recommends the use of syrup of ipecac for first aid of accidental poisoning at home.

Clinical experience shows that the sooner ipecac is taken after an accidental poisoning; the greater 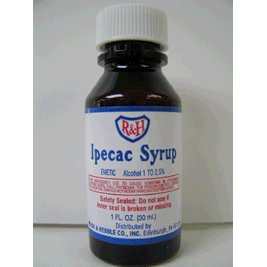 the amount of poison is removed from the body through vomiting. But even if the syrup is taken immediately after ingestion of poison, vomiting does not guarantee removing all of the toxins from the body. The potential for harm still exists despite taking ipecac. In addition, studies have shown that persistent vomiting may reduce the effectiveness of medications take for poisoning, such as antidote and activated charcoal – usually, the most effective treatments for clearing toxins out of the system.

Syrup of ipecac can also cause diarrhoea and lethargy. These symptoms, particularly lethargy, can make diagnosis and monitoring even more difficult as they can mimic the adverse effects of the ingested poison. Moreover, when ipecac is readily available in the medicine cabinet or first aid kit, improper use is very likely. It can be taken even when not necessary.

Syrup of ipecac was originally recommended as home remedy for accidental poisoning especially in people at risk of symptoms worse than vomiting but not at risk of severe symptoms requiring emergency care. But the results of a recent study have led to the debunking of this idea. The study that gathered data from several poison centers in the US revealed that use of ipecac does not actually reduce the number of hospital visits. Moreover, the study further showed that children who were given ipecac after accidental poisoning did not fare better than those who were not given ipecac. While this does not conclusively say that ipecac is not effective, its limited benefit does not justify its position as the primary first aid remedy for poisoning at home.

Health experts want to give credence on prevention as the primary method of steering clear of poisoning hazards. There are a number of things you can to minimize the risk of accidental poisoning at home:

Let us know if you liked the post. That’s the only way we can improve.

View all posts by vanfirstaid →

Fact Checked Leg cramps are a sharp and sudden contraction or tightening of the muscles in the calf which last for a few seconds to minutes and can be relieved by gently stretching the muscles. Causes of leg cramps Poor circulation of blood in the legs Muscle fatigue Lack of proper stretching Working calf muscles […]

Fact Checked Overview Bruises are bluish or purple-colored blotches that appear on the skin when small blood vessels, known as capillaries, break or rupture below the skin. The blood from the capillaries escapes into the soft tissue underneath your skin, causing the bruising. Over time, this goes through shades of yellow or green – generally […]